Golf, more often than not, is a life-long journey of self-discovery. Just ask anyone who plays the sport regularly – anger can turn to elation in mere seconds. A polite and humble friend might end up an obnoxious competitor. The sport essentially brings out the best, and worst in people.

From pushing one’s limits to questioning one’s integrity, that is what movies on golf have been trying to capture; the essence of the sport in all of its forms.

Here are five movies on golf you have to watch, especially if you are just picking up the sport.

Perhaps the greatest movie ever played.

Based on the true story of Francis Ouimet (Shia LaBeouf) and his early life, the movie is set in 1913, documenting Ouimet’s accomplishment as the first amateur to win the U.S. Open. Amateur golf in that era was a sport only for the wealthy, and the film depicts Ouimet as a poor immigrant child of a working class family. In the movie, his father is extremely vocal against Ouimet learning golf and constantly puts him down.

The story begins with Ouimet watching an exhibition match by the legendary British golf pro Harry Vardon (Stephen Dillane) as a 7-year-old boy. He will later go head-to-head with his idol and claim the U.S. Open.

Sentimental, tear-jerking and uplifting, the story focuses on family, hard work, and how a dream can become reality.

As the story goes, a washed-up golf pro who works at a driving range tries to qualify for the U.S. Open in order to win the heart of his successful rival’s girlfriend.

Roy McAvoy (Kevin Costner) was a golf legend with a bright future, but his rebellious nature and bad attitude cost him everything. Now working as a golf instructor, he falls for his newest pupil, Dr. Molly Griswold (Rene Russo), a psychiatrist who happens to be the girlfriend of PGA Tour star and Roy’s rival, David Simms (Don Johnson). After he is humiliated by Simms at a celebrity golf tournament, McAvoy decides to make a run for the PGA Tour, as well as Molly’s heart.

Humorous without compromising on the importance of a strong message, ‘Tin Cup’ is the perfect package filled with inspiring quotes and motivation in whatever we do.

“When a defining moment comes along, you can do one of two things: Define the moment, or let the moment define you.” 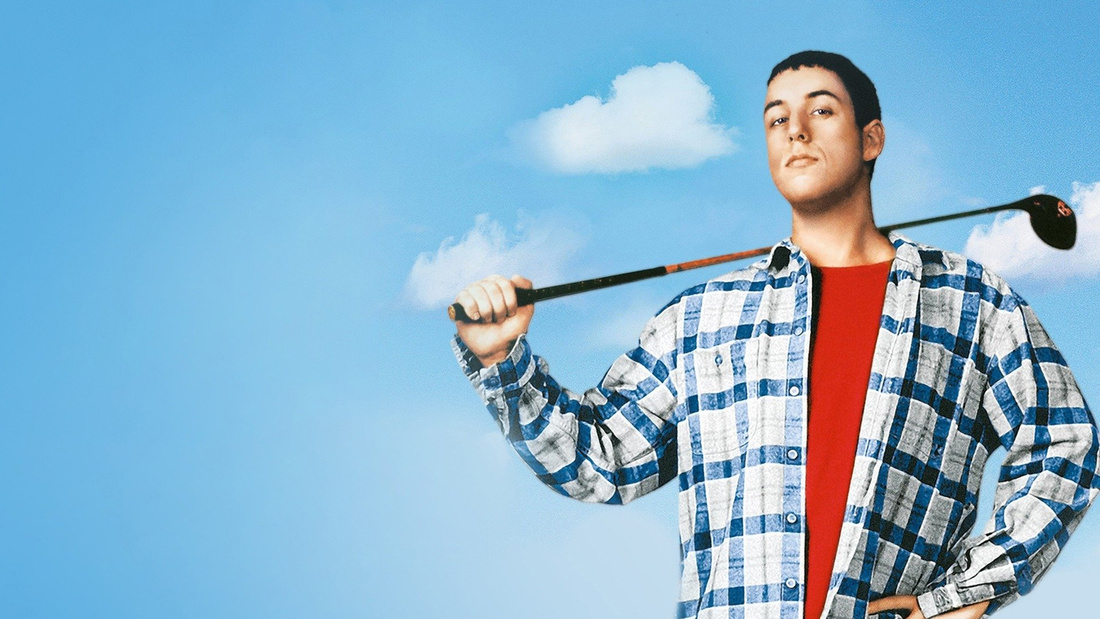 1996 is a good year for golf movies. With ‘Tin Cup’ a blockbuster hit, the slap-stick, laugh-a-minute comedian, Adam Sandler, does his part to promote the game as well.

All ‘Happy Gilmore’ (Adam Sandler) has ever wanted is to be a professional hockey player. But he soon discovers he may actually have a talent for playing an entirely different sport: golf.

When his grandmother (Frances Bay) learns she is about to lose her home, Happy joins a golf tournament to try and win enough money to buy it for her. With his new found talent and foulmouthed attitude, Happy becomes an unlikely golf hero – much to the chagrin of the well-mannered, country club-bred golf professionals.

A classic comedy, the movie comes with all of Sandler’s usual schtick with cameos from several huge stars such as Bob Barker and Lee Trevino.

Shooter McGavin, portrayed by Christopher Macdonald, is often credited as a cult-favourite in pop culture.

If you are a fan of slap-stick humour, as are most people in the 1990’s, this is a must-watch.

From fiction to fact, ‘The Short Game’ is a documentary featuring the world’s best seven-year-old golfers as they travel to Pinehurst, North Carolina, to compete in the World Championships of Junior Golf.

Depicting the trials and tribulations of young sports boys and girls, it presents eight entrants to the 2012 U.S. Kids Golf World Championship.

Beginning six months before the championships, the crew visits each of the eight subjects at their homes, some of which are as far away as Paris, Manila, Johannesburg and Shenzhen to meet the kids and their parents.

The subjects of the movie are evenly split between talented children from the United States and other countries with five boys and three girls, including Allan Kournikova (half-brother of tennis superstar, Anna Kournikova), Sky Sudberry, and Augustin Valery (great-grandson of French poet Paul Valery).

Not to be confused by another movie named, “The Founder”, this documentary tells the tale of 13 women golfers who broke the gender division in the sport forever.

In 1950, they battled prejudice and preconception to create the Ladies Professional Golf Association (LPGA). Blending archival footage with new interviews, this documentary charts their journey.

‘The Founders’ chronicles stories of these women and shows how they fought to overcome incredible odds in order to form the longest-running women’s sports organisation in the world in the late 1940s. Although fierce competitors in an intensely individual sport, ‘The Founders’ worked as a team to shift the public’s perception of what it meant to be a lady on the links.

Today, the LPGA is the oldest continuing female professional sports organisation in the United States, and through golf clinics, scholarship programs, and thriving charitable foundations, ‘The Founders’ still work to ensure that women have a lasting place on the green.

We leave this here, because frankly -‘Caddyshack’ is one of the most iconic golf films ever produced. We couldn’t have omitted it from this list.

Do we need to tell you more than the fact that this is Tiger’s all time favourite movie? Just go watch it.