Women’s football may not be as popular as their gender counterparts but it has produced world-class players with skills to match their looks. In this list, we introduce ten ladies who could easily nutmeg us and get away with it.

European women are known for their class and natural beauty and West Ham United midfielder, Julia Simic, is no different. The German-born Simic has Croatian genes which is good for her looks as well as for her footballing ability. Prior to her move to West Ham in 2018, the 30-year-old enjoyed a successful career in her native country winning the Bundesliga with Wolfsburg and the DFB-Pokal three times in a row. Simic scored 64 goals in 236 appearances for the four clubs she has played for.

She is also one of the few footballers to pose for Playboy Magazine in 2011 which caused quite a stir in the industry.

Sydney Leroux is one of the most special members on this list because the US forward is a proud mother of two. Considering the fact that she is only 29, that is quite an impressive feat that she has accomplished.

Leroux was an important member of the squad that won the 2015 World Cup and despite not playing for the national team in recent years, she is still held in high regard by her colleagues as she holds the record for most goals scored (30) at the under-20 level. She was also one of the rare athletes to appear in ‘The Body Issue’ of ESPN’s magazine. Her achievements in all domains put her up there with the best and most beautiful footballers in the world.

Arsenal groomed Leah Williamson from the age of 9 until she was ready to make her senior debut in 2014 as an 18-year-old. Now 22, the English midfielder-turned-defender has one of the prettiest faces in the game and is also one of the best prospects in England.

She won the England Women’s Youth Player of the Year award and became a regular feature in the Arsenal first team in 2017. Arsenal’s coach, Joe Montemurro, saw her potential as a centre back and played in that position for the entirety of the 2018-19 FA Women’s Super League where she helped her team to become crowned champions.

Williamson is a star in the making and even England manager, Phil Neville, said that she could go on to captain the England squad someday.

From watching the 2015 World Cup final in a pizza shop to scoring in the 2019 World Cup final, Rose Lavelle has had a meteoric rise to stardom and it’s not just because of her attractive features. She emerged as a fan favourite after some expert midfield displays in this year’s World Cup especially against England in the semi-finals.

The 24-year-old went down injured in the last quarter of that game and was a doubt for the final. However, she still started the final and took the lead with a solo effort against the Netherlands. Lavelle went on to win the Bronze Ball as the tournament’s third-best player and with a bright future ahead of her, there is more to come from this charming American.

Mallory Pugh burst onto the international scene at 17 years of age and scored on her international debut. It wasn’t just her performance that was eye-catching but also her pleasant appearance that made fans fall head over heels in love with the young and upcoming star.

In her early days, she was awarded the U.S. Soccer Young Female Player of the Year award and now at 21, she has already made 56 appearances for the senior national team and scored 17 goals in total. The American forward is destined for even greater things in the coming years. Pugh also scored her first-ever World Cup goal in that 13-goal rout against Thailand and is the youngest World Cup winner to make it on this list.

The Norwegian forward made history when she became the first winner of the Ballon d’Or Feminin in 2018. However, she also caused controversy by rejecting call ups from the national team since 2017 due to conflict with Norway’s football federation. Nonetheless, at a tender age of 23, she has already scored more than 200 goals in her career.

The blonde beauty joined Lyon in 2014 and claimed three Champion’s League trophies with them and while finishing as the top scorer in the French division for the last three seasons. With so much more time left in her career, she has the potential to become an icon in women’s football.

She may give off the vibes as the girl next door but Lieke Martens is definitely way more than just that. The Dutch is easily one of the best midfielders in the modern era as both FIFA and UEFA recognized her as the best player in the world in 2017.

Regarded as the best player of the Netherlands national team as well, the 26-year-old won the 2017 European Championship for them by scoring an important goal in the final against Denmark.

Martens was also nominated for the Euro Team of the Competition and named as the Player of the Tournament for her outstanding performances. The Barcelona star also helped her team reach the final of the Champion’s League in just her second season at the club. Surely she will experience more success in the coming years.

The classy Amandine Henry is an indispensable player for French champions Lyon where she spent most of her career and is also currently the captain of the French national team. She has the best of both worlds in terms of her football expertise as she is able to break down opposition attacks and initiate the counterattack as well contribute crucial goals from time to time.

The 29-year-old is gorgeous and also a top athlete – two things which rarely occur concurrently. With all that in the bag, Henry is truly the crème de la crop of France in women’s football and looks.

Switzerland is known for their banks and it’s horology, but this time (pun intended), they have outdone themselves and produced one of the finest ladies in football – Alisha Lehman.

She impressed for them at the under-19 level and was scouted by West Ham to become their starting winger in her first season at the club. The 20 year-old netted eight goals and brought them to the FA Women’s Cup final where they finished runners-up. 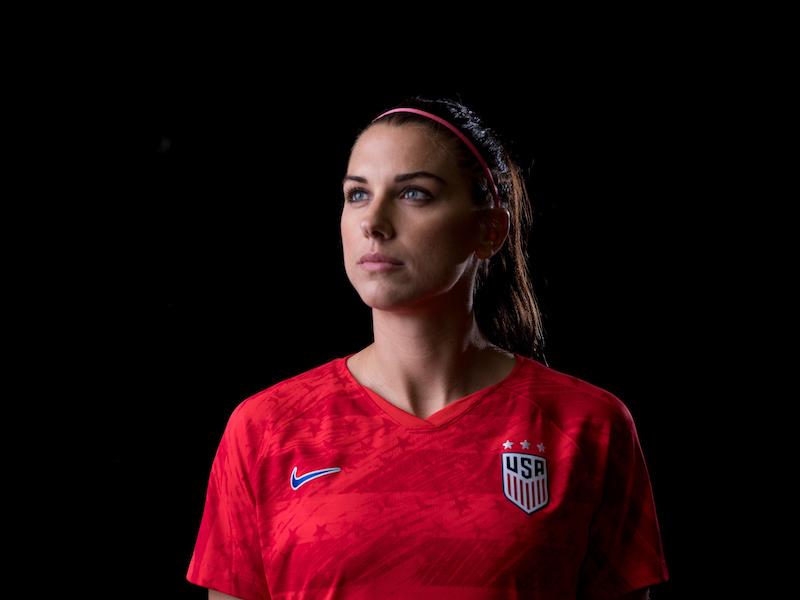 With two World Cups, a huge reputation in women’s football, and a smile that’ll melt your heart, Alex Morgan is the most talented and beautiful face of women’s football. She is currently one of the best footballers in her era and has played for a host of American clubs including a short but successful loan stint at Olympique Lyon, arguably the strongest team in Women’s football.

In her single season with Lyon, she yielded the French League, the French Cup and the Champions League. The 30-year-old striker also appeared on the cover of Sports Illustrated twice – a true testament to her endearing beauty.