This week’s English football saw seven teams who won by a margin of just one goal. Far from the usual drubbing we have been acclimated with evident in the past weeks where 4-1, 5-1 and 3-0 seemed like a typical score. 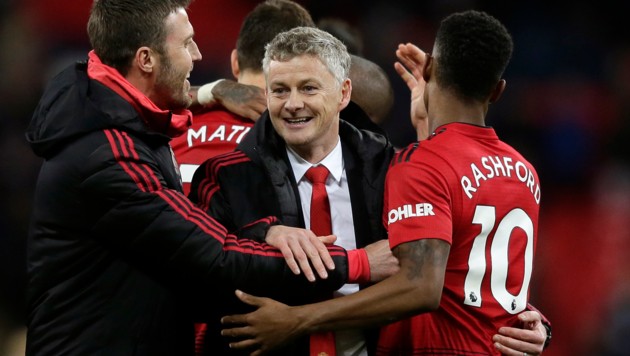 Manchester United kept their top-four hopes alive after beating Tottenham Hotspur 1-0 at Wembley and maintaining Ole Gunnar Solskjaer’s perfect record of six wins out of six since taking charge. Marcus Rashford’s first-half goal gave the visitors the lead but it was the heroics of David De Gea between the sticks that truly stood out in this modest match up. The Spaniard who has constantly been rumored for a transfer away Old Trafford, made 11 saves in the second-half alone to keep United in the game.

Truth be told, Spurs custodian Hugo Lloris also made several clutch blocks and saves throughout the game and was unfortunate to concede the goal but Paul Pogba displayed outstanding vision with the lobbed through pass which found itself onto Rashford’s foot which led to the goal. The Spurs came back roaring in the second half with close strikes from Dele Alli and Harry Kane but De Gea’s wall-like performance denied them any points.

Brighton put up a physical presence during the match, conceding 15 fouls and one of them being a costly penalty. A stale first half saw Liverpool enter the second with more aggression, and just five minutes in, Salah’s deft footwork inside the penalty area resulted in Pascal Gross pulling him down. Salah converted the spot-kick but also missed a string of chances late into the closing minutes, including an open goal from just five metres.

Brighton’s defence was spot-on as they never really allowed Xherdan Shaqiri or Roberto Firmino to make an impact. The 4-5-1 formation set by Chris Hughton constricted Jurgen Klopp’s free-flowing offense with tight zonal markings and playing deeper with only Glenn Murray ahead. Liverpool’s counter-attacking strategy was hardly applied and it was after the first goal which then forced Brighton to push higher for an equalizer.

The result put Liverpool on 57 points from 22 games, seven ahead of closest rivals Manchester City who have a game in hand and are scheduled to face the Wolverhampton Wanderers on Monday.

Chelsea earned a tough victory against a struggling Newcastle 2-1, after goals from Pedro and Willian once again proved that Maurizio Sarri lacked a proper center forward or striker.

Pedro made it 1-0 just 10 minutes in at Stamford Bridge after an exquisite 55-yard pass from David Luiz inside their half. The former Barcelona winger then flicked it over Martin Dubravka after beating Cieran Clark to the ball. Clark made amends for his mistake by nodding home a powerful header from a corner just before half-time to tie the game.

Eden Hazard found Willian on the left flank and the Brazillian cut-in and finessed a shot into the right corner for the win.

The result leaves Chelsea just a point behind third place Tottenham, who have a game in hand.

The result battered the Gunner’s bid for a Champions League berth as they are now level with Manchester United, just ahead on goal difference.

In other matches, Crystal Palace fell to Watford 1-2 after goals in the second half from Craig Cathcart and Tom Cleverley. Palace’s first goal was ironically an own goal by Cathcart.

Burnley edges past Fulham 2-1 unconvincingly from two own-goals by Claudio Ranieri’s men. The Clarets actually won the match without a single shot on target.

Southampton grinds past Leiceister City 2-1 despite only having 10 men on the field by half-time. This crucial win moves them out of the relagation zone.